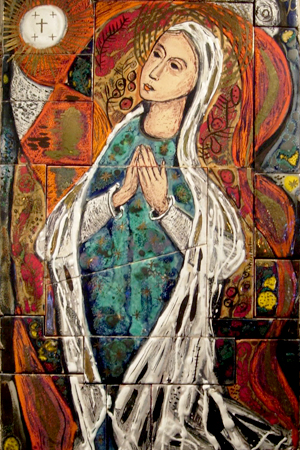 Memorial of the Blessed Virgin Mary, Mother of the Church

This year, for the first time, this Memorial must be celebrated by everyone choosing to attend mass , according to a new directive from the Congregation for Divine Worship and the Discipline of the Sacraments.  The “must be” in this statement does not mean it is a new holy day of obligation, but rather that anyone who freely chooses to celebrate mass on this day is no longer free to choose from a whole series of options (which we have called “votive” masses) but must choose the mass formulary entitled MEMORIAL OF THE BLESSED VIRGIN MARY, MOTHER OF THE CHURCH (which apparently is not yet available).

So anyone choosing to celebrate mass today must use this Marian prayer form and not arbitrarily, as was previously done, choose the Mother of Sorrows or the Immaculate Conception or The Mother of Holy Hope, but rather THE BLESSED VIRGIN MARY, MOTHER OF THE CHURCH.  Pope Paul VI (to be canonized with Oscar Romero in October of this year) is the most authoritative spokesperson describing Mary in this way, which he did November 21, 1964, during the course of Vatican II.

We may wonder at the newness or difference involved in calling Mary the Mother of the Church, since we have been calling upon her as the Mother of God for centuries, a title that no other can equal in importance.  And, as we know, we are accustomed call upon her with many titles.  But there have been periods in the history of the church when calling on Mary with certain titles has proven difficult for certain groups, as if attributing to her some of these titles that we find in certain litanies devoted to her derogate from or diminish the honor and glory that belong properly to God.  And even now, in the breviary (the prayer book, used daily by priests and deacons) the layout of this official prayerbook of the church gives priority to a section devoted to the “dedication of a church” before it provides access to prayers devoted to the Blessed Virgin Mary.  Should it not vice versa?  But, in general, these quaint arrangements have little effect on our prayerful devotion to Mary, nor do they diminish the status of Mary in God’s plans for her and us.

So we are indebted to Blessed Pope Paul VI, soon to be recognized as a saint (in November of this year).  And there is room to wonder whether Fr. Barnabas Mary Ahern, a now deceased member of our Holy Cross province, might not have been instrumental in bringing attention to this title of Mary as Mother of the Church, given his notable devotion to Mary.  For he was part of the American contingent of bishops and theologians attending the first part of the 2nd Vatican Council, and Cardinal Albert Meyer of Chicago took along with him to the council as his theological advisor, Fr.  Barnabas Mary Ahern, C.P., whose biblical expertise together with his notable devotion to Mary might well have proven instrumental in persuading the American bishops at the council to highlight the prominence of Mary as a center of their efforts at the council.  At any rate, it is fitting that this new feastday of Mary occurs for the first time in May this year, the month dedicated to Mary, and, in the future, it will occur on the Monday following the feastday of Pentecost.  For it is likely that Mary was part of the large group of people assembled in the Upper Room, in Jerusalem, on the occasion of Pentecost, often called the birthday of the church, and she could certainly claim preeminence among the members of the church that was born on this occasion, as mother of the church.