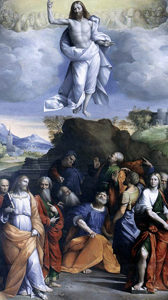 As I was reflecting on Jesus’ Ascension, I found myself thinking about the “ascension” we hope to make. We don’t expect to ascend to heaven as Jesus did. But we do hope that when we leave this earth, we will be in heaven with Him.

This kind of ascension is not done just by looking up toward heaven. As the apostles are still looking up as Jesus leaves their sight (Acts 1:11), two angels say to them, “Men of Galilee, why are you standing there looking at the sky?” To ascend to holiness, it is true that we need to be mindful of the “things of heaven.” But we need to look at what is going on in the world with our brothers and sisters and indeed with all of creation, and respond with the love of Jesus Christ.

We also know that ascension to holiness does not happen in one, uninterrupted, straight line of spiritual progress. There can be obstacles, setbacks, and surprises. Recognizing this has led me to reflect on how important the Easter season is. During Lent, we may ask ourselves why we find ourselves bringing the same issues to God every year. Although it may look like we’re traveling in circles, dealing with the same things, what we hope to be doing is actually travel in a spiral, in which we may deal with the same issues that turn us away from God, but on an ever deeper level. And so we need Lent to come around every year.

Perhaps we could look at Easter the same way. Every year, we come to the hope, joy and peace of Easter, but hopefully on an ever deeper level. Hopefully we come more and more in touch with the truth of Easter, and the victory of life and love over sin and death. And so we need Easter to come around every year as well.

To ascend to holiness involves trust in the love that God has for us in Jesus Christ. As it says in our second reading from the letter to the Hebrews (9:24-28, 10:9-23), “… let us approach with a sincere heart and in absolute trust, with our hearts sprinkled clean from an evil conscience and our bodies washed in pure water. Let us hold unwaveringly to our confession that gives us hope, for he who made the promise is trustworthy.”

To ascend to holiness involves a willingness to let go of whatever takes us away from God. Before Jesus ascends to heaven, the apostles ask Him, “Lord, are you at this time going to restore the kingdom to Israel?” It seems that they were still hanging on to the idea of Jesus as a worldly king, even with all that had happened. Sometimes we hang on to worldly ideas about Christ, even when we know what Jesus did for us on the Cross, and that we have the promise of everlasting life in His Resurrection!

To ascend to holiness also involves reaching outside of ourselves. We are not to be only concerned with our ascent, but the ascent of others as well. We are called to lift others up, as we have been lifted up. Too many people in our world are struggling just to ascend to survival. Others are struggling to ascend above despair and anxiety. Still others are trying to ascend to sobriety. We are called to share the hope and joy, and most importantly, the love that Easter shows us. Might we even say that our ascent is tied up with the ascent of others? What kind of a world would we have if we acted on that belief? Would that be too much to hope for? Not for an Easter people!

Fr. Phil Paxton, C.P. is on staff at St. Paul of the Cross Retreat and Conference Center, Detroit, Michigan.