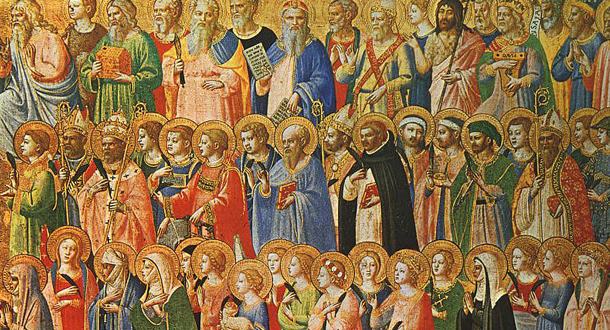 Feast of All Saints

A remarkable feature of earliest Christianity is how the various communities of Christians spread throughout the Mediterranean world kept in touch with each other. Historians tell us that because of the network of Roman roads that developed in the first century, travel became much more widespread.  The roads were built mainly for military purposes, but ordinary people traveled on them because it made journeys easier and safer.

The early fathers of the Church considered the umbrella of the Roman Empire a stroke of Providence because it helped spread the gospel, even though the Empire would also become a source of persecution for Christians.  Thus, Paul and many other early Christian missionaries took to the road to proclaim the gospel and create new Christian communities.  And Paul and other leaders such as Peter and other anonymous authors would use that same network of roads to send letters of encouragement and instruction to far-flung communities of Christians.

But underlying—and inspiring—this amazing network of communication was something deeper—the reality we celebrate today on the feast of “All Saints.” The Christians believed that they shared a deep bond with each other, even though separated by distance and language and culture. Paul would urge his Christians in Corinth to think of themselves as “one Body in Christ” or as a harmony of many gifts but “united in One Spirit.”  A favorite designation Paul used in referring to his fellow Christians in the communities he wrote to was that of “the saints” or “the holy ones.”  Christians were “holy” not simply because they led exemplary lives but because they were united in faith and part of the Body of Christ.

That sense of being profoundly united as Christians is expressed in the eloquent words of Ephesians: “There is one body and one Spirit, just as you were called to the one hope of your calling, one Lord, one faith, one baptism, one God and Father of all, who is above all and through all and in all.” (Eph 4:4-6). This the underlying motivation for this feast of “All Saints.”  So strong is the bond that ties us together is that it extends not only to Christians living now in various parts of the world but even to those who have gone before us in death.  They, too, are the “holy ones”—the “saints.”  Not just the famous saints like Augustine and Theresa and Paul of the Cross, but all the everyday saints who have been part of our lives—our parents, our siblings, our dearest friends whose deaths we mourn but not without hope.  These form the “great multitude which no one could count”” referred to in today’s reading from the Book of Revelation.

We trust that the bond of life that God has given to us—and enhanced by our baptism and Christian faith—will transcend death and enable us to hope in a future where we will be united with all those we love—with all the saints.