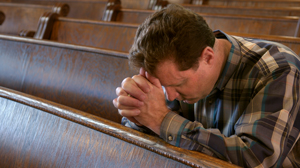 There are many forms of prayer: praise, thanksgiving, and petition. Jesus begins this teaching by speaking about prayer in general. He says it should have two qualities. First we should “pray always”. For St. Paul of the Cross this means we must cultivate a deep interiority. Paul was a man of action. He founded thirteen monasteries, preached over two hundred missions, directed eighty retreats, and wrote about 10,000 letters of spiritual direction. But the foundation of all this work was his union with God. He valued solitude, quiet, silence, and spent hours each day in prayer. We could say that he walked in the presence of God.  We need to cultivate a like interiority in our own lives. Achieving it is a challenge. Jesus recognizes this by making a second point. He notes that we should pray “without becoming weary”. What does he mean?  Maybe the Revised Standard Version catches the meaning more clearly when it translates the Greek as “pray and not lose heart”.  At times it seems that our prayer is not getting us anywhere. The same old stuff comes up when we prepare for the Sacrament of Reconciliation. What’s the use? The temptation to give up prayer or let it slip is subtle, almost not a conscious decision. Paul of the Cross had to face this often in the people he directed. Again and again he encourages them to be faithful to prayer. If they can do nothing else they should just gaze at the crucifix, the sign of God’s overwhelming love.