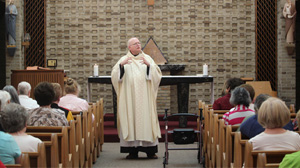 A lot of the parable deals with the one who received the one talent and did nothing with it. I think he did that out of fear of what would happen if he lost it. Sometimes we are fearful of using all our talents. We can be afraid of making mistakes. Or we can be afraid of what other people might think of us. Or we can simply be afraid of not being up to the tasks to which we are called.

The reason I felt drawn to the middle servant is that he avoids a trap into which I have fallen many times in my life. What’s remarkable to me about him is that he does not seem to mind that the first servant got five talents, and he received “only” two. He simply works with what his master gives him and he uses it well. There are times when I can be envious of those who seem to be more talented than I. They either do what I do better than I, or they do many more things than I do equally well.

I think one of the hardest lessons I’ve learned is that acting out of fear, as the last servant did, or acting out of jealousy, as the middle servant could have done, is ultimately a form of being self-absorbed, because when I’m concerned about how I will look if I make a mistake, or when I compare myself to others, it becomes all about me. The middle servant does not do that! He doesn’t even seem to look down upon the last servant.

So, strange as it may seem, the middle servant is the one with whom I identify, and the one I believe I’m called to emulate. God has given me love and grace. God has given me gifts. At times, they may not seem to be as profound or as important or as numerous as the ones others may receive, but they are the ones given to me, and I am called to use them for the sake of the kingdom.

If we use our gifts the best we can in doing God’s will, we need not fear “the day of the Lord” spoken about in our second reading from 1 Thessalonians (5:1-6). We will indeed be “children of the light and children of the day.” We need not compare ourselves to others, but instead, like the “worthy wife” mentioned in Proverbs (31:10-13, 19-20, 30-31), we can live lives of service, reaching out to the poor and the needy.

May we not waste time in fear or envy, but use the gifts we have been given for the world God loves so much.