The Presentation of Mary 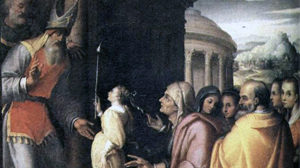 The Presentation of Mary in the Temple was a favorite devotion of St. Paul of the Cross.  It represented a special way for him to think of Mary, as he pursued his own task of trying to do what he understood God was asking of him: to dedicate his own life to God, as she did, by starting new religious communities of men and women in the church who were to dedicate their lives to God, as she did.  For there is no question but that Mary was totally committed to what she perceived God asking her to do.

St. Paul the Apostle captures this in his letter to the Galatians, suggested as a reading in today’s Eucharist, where he recounts the sending forth into our midst of His own Son, to free us for our destiny of achieving our special status as adopted children of God.   And St. Paul notes that “this Son (was) born of a woman”, that is, Jesus was born of Mary, who thereby participated in the great redemptive act of freeing us from the burdens of the law.  Without her this would not have come to pass, at least as we have come to know it.

And St. Luke, in the day’s gospel, spells out this role of Mary in God’s work by detailing its very beginnings, when the angel Gabriel announced to Mary her calling and her destiny in being the mother of this Son of God, enabling Him to go about His task of freeing us all from the evils of sin and the burdens associated with it.

In reflecting on this glorious role of Mary, the church, over the centuries, grew in appreciation of Mary’s participation in God’s work, realizing that this was the center-piece of her life, and that it had its beginnings for her at an early period, before she was even married.  Of course, as we understand from St. Luke’s account of its inception in her life, it represented a challenge for this young woman, since she was not yet married, and so the angel Gabriel’s announcement that she was to be a mother, needed some clarification on how all of this was to come about.  And as the angel provided this, Mary came to see the dimensions of the task being laid out before her, and she acquiesced: “Let it be done to me as you say.”

From this we gather this young woman was equal to the task at hand, not on the sudden, but as a result of being someone who was close to God and His way of doing things, throughout her young life, indeed, from its very beginning, convincing us that her orientation toward God was a lifelong tendency, from her very infancy, as today’s feastday suggests: her presentation in the temple early on.  Though we have no biblical evidence of this, we really don’t need it, given the trajectory of her life, from beginning to end.  So a tradition built up about her early dedication to God, impacting the life of the church, and the life of St. Paul of the Cross, whose desire to dedicate his own life to God’s plan for him was inspired by this devotion to Mary’s presentation, by her parents, to God.

Paul’s own sense of a developing vocation in his life took the shape of new congregations of men and women dedicated to the same task facing Mary, that of our redemption, in view of which he named the first monasteries (retreats, as he styled them) for both men and women Passionists: the Presentation.  And this is what we recall and honor today: the total dedication to God’s work, from the very beginning, symbolized by the presentation Passionist men and women make of themselves.

This is an instance of the role that tradition, along with scripture, plays in the life of the church.  It too has deep roots in history, and it captures the overflow of significant events in the life of God’s people.

It has a secular counterpart in the lore surrounding some of the larger-than-life celebrities dotting the history of any given era.  For instance, in the world of professional baseball, there are instances of remarkable exploits leaving behind them, on the sea of life, a wake, as evidence of something significant having occurred.  As in the case of the relatively unknown Chicago White Sox shortstop, Luke Appling, who was of some significance during his playing years, but whose exploits for “greatness” lie outside the usual criteria.  For he had a remarkable ability to hit foul balls—an interminable series of foul balls—gradually causing unrest among the fans, but especially exhausting the opposing pitcher on the mound, to the point where at times he had to be relieved and replaced—the very outcome Luke aimed at.  His technique for winning ballgames settled into the lore of baseball, as a way of wearing down an excellent pitcher.  Foul balls may not be celebrated in the annals of baseball but the technique is now part of baseball “tradition”, rooted in history.  For who would otherwise remember Luke Appling, if not for his ability in hitting endless foul balls?  For it won games.  And even in our Christian faith, who would remember certain remarkable feats in our history, were it not for our traditions?