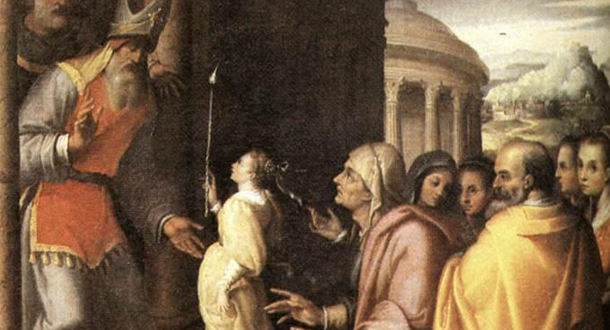 The Presentation of the Blessed Virgin Mary

Today we celebrate a day commemorating the dedication of Mary to God’s work in our midst.  It is a central feature of what devotion to Mary is all about.  The notion of “devotion” is somewhat unique to what Catholicism fosters and promotes.  It is like the shadow cast by someone who has gone before us, and who has left a vivid memory of what he or she has been all about.  Devotion in Catholic tradition is a developmental growth, starting out because of its association with some noteworthy historical character, but outliving that person over time, and sometimes actually augmenting certain features of that person’s life that still exert a strong influence existing at the present time.  This doesn’t mean that these features are wrong.  Rather, it means that, during their lifetime, they stirred up sentiments of admiration and even veneration that carry on, following the death of the original, historical person.

Such seems to be the case of this feastday that has gained a foothold in the devotional practices of the Passionist Congregation: The Presentation of Mary, by her parents, Joachim and Ann.  There are no historical accounts of this occurring, but there is a solid foundation in the Jewish practice and devotional life of the first century and earlier when infant daughters as well as their baby brothers were brought to the Jewish temple in Jerusalem and offered back to God in gratitude to Him for bestowing on them the blessing of this child.  So far as baby boys were concerned, this was a mandated practice, but not so, baby girls, yet, given the great importance that temple worship and devotional practices occupied in the lives of devout Jews, it is likely that this practice carried on for baby girls as well as baby boys.  And certainly Joachim and Ann, Mary’s parents, could be counted among the pious Jews of their time.  And so bringing their new daughter to the house of God in Jerusalem to ask God’s blessing on her would have been a devotional practice among such parents.

Somewhere along the line, St. Paul of the Cross encountered this practice; indeed, in his time it had acquired the status of a devotional feastday.  And it apparently appealed quite strongly to him—this notion of devoting oneself fully and completely to whatever God had in store for a person, whether male or female.  The Presentation of Mary in the temple struck a resounding chord in his life, and, as he moved out of boyhood into manhood, and was inspired by God to start a new religious order in the church, Paul’ lifelong devotion to Mary under the title of her own presentation to God in the temple appealed to him so much that, as a sufficient number of young aspirants to the new Passionist community began to fill its ranks, Paul decided both to build a residence (called “a retreat”) to accommodate them, and to name it after The Presentation of Mary in the Temple.  He wanted his young aspirants to be as sincere in their dedication to the Passionist way of life as they could possibly be, in memory of Mary’s devotion to her call.

Years later, when he provided a similar religious house for young women aspirants as the first Passionist Nuns, Paul endowed their new place of residence with the same name: that of the Presentation of Mary in the temple.  So obviously this ancient practice and devotion was a center-piece of Paul’s devotional life.  So this practice of devotion to Mary’s Presentation in the Temple has been part of our Passionist history from the very beginning, and it should appeal to anyone seeking to draw closer to God by way of a strong devotion to Mary’s own Presentation of the child Jesus to God, in the temple in Jerusalem, thanks to the devotion of her parents, Joachim and Ann.