Feast of Saint Thérèse of the Child Jesus 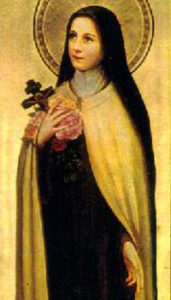 Today we celebrate the feast of one of the church’s most beloved and surprising saints of modern times.  Thérèse died in 1897 when she was only 24 years old.  As a young adult she had never left her Carmelite cloister, never went to college or a university, and was from a small town in France.  Yet the spirit of this determined young woman reached out to the entire world.  Like another Theresa—Mother Theresa of Calcutta fame—she was rapidly canonized in 1925, named along with St. Francis Xavier as “co-patron of the church’s missions” by Pius XI in 1927, and declared a doctor of the church by Pope John Paul II!  She is popularly called “the Little Flower” but in many ways she was anything but a little flower!

What was it about Thérèse that has made her so attractive a saint?  The readings assigned for today are not specifically chosen for this feast but fit well anyway and give us a hint about this young cloistered Carmelite’s strong spirituality.  Thérèse spoke of her “little way” which meant living faithfully and humbly each moment of her life, striving to do all things out of love for God. The first reading for today is taken from the conclusion to the book of Job.  Here this battered believer, who seemed to lose everything dear to him in his life, at last finds peace.  He bows before the might of God and trusts that God ultimately would bless him.  Job’s humility is met with God’s providential love and he ends his life surrounded by his beautiful family and the flowering of all his work.  It is this deep down trust in God’s love, and striving to live daily in that spirit that formed Thérèse’s spirituality.  Despite later attempt to portray the “Little Flower” in sentimental and saccharine tones, she was in fact sturdy and realistic, enduring the foibles of her fellow Carmelites and suffering chronic illness, but never yielding to indifference or self-pity.

There is another dimension to Thérèse’s spirit that is important—one honored in her title as patroness of the church’s missions.  Although her life was spent inside a French cloister, her spirit of love for Christ roamed the world.  She said she wanted to be the “apostle of the apostles” (a title, by the way, that the early church gave to Mary Magdalene for her role in being the first to alert the disciples to the resurrection of Christ!) and she desired to “bring thousands of souls to Christ.”  No wall could keep Thérèse confined; her solid Christian faith expanded her horizon to the whole world.

That expansive spirit is echoed in Jesus’ ardent prayer of praise in today’s gospel selection from Luke 10:17-24.  When the seventy-two disciples whom Jesus had sent out on mission return “rejoicing,” Jesus himself exults in God’s gracious and expansive love.  “Blessed are the eyes that see what you see,” Jesus tells his disciples.   Because of her strong faith and irrepressible love for Christ, Thérèse, too, saw the whole world as a place of beauty, one deserving of hearing the liberating message of the Gospel.
Fr. Donald Senior, C.P. is President Emeritus and Professor of New Testament at Catholic Theological Union.  He lives at the Passionist residence in the Hyde Park neighborhood of Chicago.