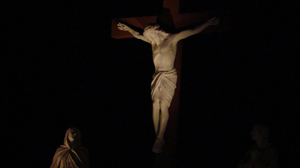 Both the readings for this Sunday are powerful.  In the gospel selection, we hear the parable of the two sons from Matthew’s Gospel. As Jesus is teaching in the temple, his opponents challenge his authority.  In response Jesus tells them a parable that has a strong punch.  A man had two sons and one day he asked the first to go and work in the vineyard.  “I will not,” the son replies, but later changes his mind and does what his father asked him.  Then the father asks his second son the same request.  He promptly says, “Yes, sir,” but in fact did not go. “Which of the two,” Jesus asks his critics, “did his father’s will?”  They answer, “the first.”  And then Jesus drives home the point of the story: “Amen I say to you, tax collectors and prostitutes are entering the kingdom of God before you.  When John [the Baptist] came to you in the way of righteousness, you did not believe him; but tax collectors and prostitutes did.  Yet even when you saw that, you did not later change your minds and believe him.”

This parable fits so well into Matthew’s portrait of Jesus.  What counts is not just saying the right words but doing the right thing. The “tax collectors and prostitutes,” people despised by others in proper society, may have started out saying ‘no’ to God’s will but changed their ways and obeyed the Father. Throughout the Gospel of Matthew, Jesus challenges religious hypocrisy and blesses those who seek to do God’s will.

There is another version of this message in the second reading, taken from Paul’s Letter to the Philippians.  The Roman colony city of Philippi in present day Greece was the first place that Paul visited when he crossed from Asia Minor to the continent of Europe.  From Paul’s later letter to the Philippians you can detect his warm love for this Christian community.  Apparently there were some divisions in the community and Paul pleads for reconciliation: “If there is any encouragement in Christ, any solace in love, any participation in the Spirit, any compassion and mercy, complete my joy by being of the same mind, with the same love, united in heart, thinking one thing…”  To make his point, Paul quotes from an early Christian hymn—one of the most profound texts of the New Testament.  He invites his beloved community to “Have in you the same attitude that is also in Christ Jesus,” and then introduces this hymn that praises Christ, “who, though he was in the form of God, did not regard equality with God something to be grasped at.” Rather, “he emptied himself, taking the form of a slave…humbled himself, becoming obedient to the point of death, even death on a cross.”  Because Christ Jesus gave of himself for the sake of others, “God greatly exalted him and bestowed on him the name which is above every name, that at the name of Jesus every knee should bend, of those in heaven and on earth and under the earth, and every tongue confess that Jesus Christ is Lord, to the glory of God the Father.”

This early hymn tells us that Christian faith in Christ as the exalted Son of God was already strong only a decade or two after the death and resurrection of Jesus.  Paul quotes the hymn to urge the Christians at Philippi literally “to think as Christ does,” or “to have the same perspective” as Christ.  They are urged not just to “look out for their own interests” but to be concerned for others. The reality that Jesus gave his life out of love for others becomes the norm of Christian life.  As Pope Francis eloquently put it in The Joy of the Gospel, “Life grows by being given away, and it weakens in isolation and comfort. Indeed, those who enjoy life most are those who leave security on the shore and become excited by the mission of communicating life to others.”

[Adapted from “Perspectives in Scripture,” a weekly column by Fr. Donald Senior, C.P., for The Chicago Catholic archdiocesan newspaper.]