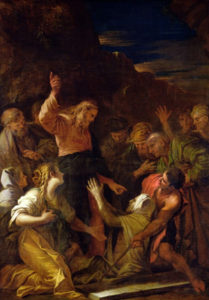 Our Gospel reading for Sunday (Luke 17:11-19) relates an encounter between Jesus and ten lepers. They beg Jesus to help them, and Jesus does. But only one of them comes back to thank Jesus, and Jesus takes note of this: “Ten were cleansed, were they not? Where are the other nine? Has none but this foreigner returned to give thanks to God?” The one who came back was a Samaritan, not a Jew.

I know the main lesson from this Gospel is to be grateful, but I found myself going back to the point that at least one of the lepers was a Samaritan. Samaritans and Jews had nothing to do with each other, but apparently, when all these lepers were suffering not only physically, but also the emotional toil of being outcast, the differences didn’t seem to matter much.

Thinking about this led me to reflect on an episode of American history I knew nothing about until I took a course on American history between the wars in college. The episode was the Veterans’ Bonus March on Washington in the early 1930’s. The country was in the throes of the Great Depression. Veterans of WWI were promised a bonus that was going to be paid in 1945. But considering the situation, they marched on Washington, hoping to get the bonus then. They set up shacks and lobbied Congress to get the bonus. Meanwhile, President Hoover and the Army felt they needed to remove the marchers, and two of the veterans were killed. It was not a great day in American history. But one of the remarkable things that happened was that white and black veterans, who were not allowed to serve together, were together in Washington. Their common plight seemed to overcome the barriers between them.

This past Monday, we celebrated a “Green Mass” at Holy Family. Parishioners from Holy Family, St. Mary’s, and St. Joseph, attended, as well as many visitors. The Mass was bilingual, and I was struck by the diversity of the people there, brought together by our faith and our care for “our common home.”

I wonder if any of this kind of thinking crossed the lepers’ minds. Did seeing those in their group, who were different, suffer as they did, change their minds about them? Were the Jews in the group able to recognize the humanity of the Samaritan? And vice versa? Would they look with horror again when they saw a leper now? Or would they think twice before they assumed the person deserved it?

I’m beginning to think that this is a crucial time to be a Passionist. Meditating on the Cross of Christ can lead us, if we’re willing, to have compassion for others. Can we hold on to our hatreds and prejudices if we see that others, as different as they may be, are carrying crosses, just like us?

Being grateful reminds us that we do not do the good that we do on our own. If we know how much we rely on God, can we really condemn each other? God has lifted us up over and over again. In gratitude and with compassion, may we lift each other up.