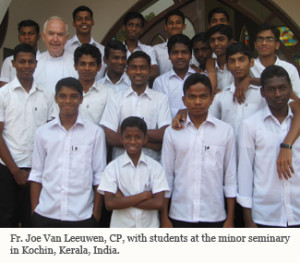 May we never boast, except in the Cross of our Lord Jesus Christ. For the word of the Cross is the power of God to us who have been saved. (Entrance Antiphon)

Today, the Church celebrates the life and death of the North American Martyrs, St. John de Brébeuf, St. Isaac Jogues, four other Jesuit priests, and two lay missionaries. These men came to North America as missionaries, to live and minister among the Huron and Mohawk nations.

The first of these missionaries arrived in “New France” in 1622. For twenty years, the Jesuit missionaries cultivated personal and social relationships with various indigenous peoples living in the region. Eventually, they focused their attention upon the Huron and Mohawk nations, who were numerous and somewhat volatile. The persecution of the missionaries began in 1642 and ended with the last one being martyred, in 1649. While this mission seemed to be an utter failure, Blessed Kateri Tekakwitha, an Algonquin-Mohawk Christian, born in 1656 and catechized by the Jesuits of the region, became an example of what committed missionary ministry accomplished.

Recently, while celebrating Mass at the National Shrine of the Immaculate Conception in Washington, D.C., Pope Francis I canonized St. Junipero Sierra, a Franciscan missionary to California. There was a lot of controversy over his declaration of sainthood. While there may be reasons why not to name him a saint, there are also many reasons why. First and foremost, St. Junipero Sierra was a missionary, whose heart led him to leave homeland in order to evangelize. The Evangelizer recognizes the tremendous transformation that needs to take place within one’s self, as he or she prepares to witness to the Gospel by word and deed. A missionary will never leave behind the culture of birth, but will need to begin recognizing the Gospel reflected in the lives and cultures of the people who are being served.

Being a missionary in other lands is an extremely difficult way of life. Passionists have been called to be missionaries from the very beginning of our foundation. One of our more famous missionaries is Blessed Dominic Barberi, C.P., who received into the Church, Blessed John Henry Cardinal Newman of England.

The Passionist of Holy Cross Province have always had missionaries to other lands. Dedicated Passionist missionaries have gone to Argentina, China, Japan, Korea, India, to name a few of our missionary foundations. As Pope Francis continues to remind us, we are a Mission Church and we are a Church with a Mission. It is not enough to receive the Gospel within our hearts. We are called to go out and proclaim the Good News to every land and people until the end of time.

In the eyes of some, St. John de Brébeuf and companions were fools to go and put themselves in harm’s way, to try to bring human dignity and the Divine to a people who did not know Jesus the Christ. We may be fools to believe that everyone of us is called to be “missionary” Catholic without leaving our house! Foolishness, indeed!

But who is more foolish? The man we find in today’s Gospel or St. Paul, the Apostle who says, “We are Fools for Christ!” (I Cor. 4:10) May our foolishness lead us to eternal life!