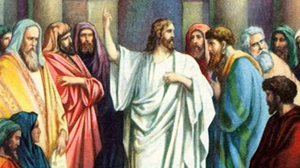 What occasion is there then for boasting? It is ruled out. (Romans 3:27)

The readings for today’s Mass challenge us on several fronts. Jesus directs his remarks to the leaders of the Hebrew faith and Paul writes to the Christian community in Rome. Both say things that no one likes to hear.

As Jesus began to bring Good News to the poor and the abandoned, to cure the sick and the dying and to forgive the sins, he met with great resistance by the majority of the religious leaders of his day.

The religious leaders of his day liked to boast. The liked to build memorials to the prophets that their ancestors had stoned and killed. The liked to revise history to distance themselves from the responsibility of those who went before them, only to do the same thing in their lifetime.

They like to use their knowledge to twist the truth. They build a life and a future on falsehoods.

Humility is not easily accomplished. Pride wears many disguises. Pride distorts the truth. Pride drives us to boast about things that we never done by ourselves, about achievements that we alone are responsible for and a false future that is not ours to give.

The saints that we honor today, St. John de Brebeuf, Isaac Jogues and their companion martyrs, overcame their desire to boast, to rely primarily upon their own resources and placed their future into God’s hands. When this lead to their death and martyrdom, then they took their rightful place beside Jesus, the Crucified Lord who rose from the death and the communion of saints.

Thus, let us rule out all boasting in our life!