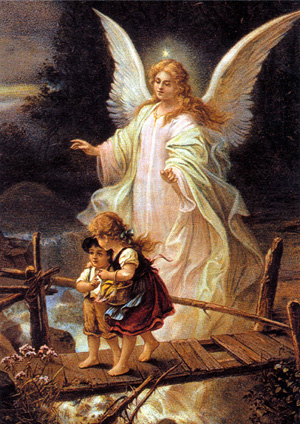 Memorial of the Guardian Angels

It happened that as I was preparing some thoughts for this reflection on the memorial of the Guardian Angels, I was sitting at a supper table with some friends. I asked them what meaning this memorial might have for them.

The conversation turned around how one first learns of “Guardian Angels” in one’s childhood, and very naturally Guardian Angels are seen as protectors from the dangers of childhood, often portrayed as a rural childhood—raging rivers, roaming animals, and finding one’s way through a darkened forest.

The imagery which depicted the role of the Guardian Angels was very uniform in children’s prayer books, catechisms and storybooks. It also was a familiar design in the stained glass windows of the churches built by many of the immigrant Catholics who came to the United States in the late 19th and early 20th centuries.

Not surprisingly, as children grew into adulthood, the awareness of having a Guardian Angel seemed to diminish, and this was the general opinion of those at table with me. It seemed natural enough that as one grew to independence and maturity, one would look after oneself without the need for a spiritual companion to pluck one from the dangers that one might encounter.

Instead of conceding that angels were of little consequence for us as adults, the conversation turned to the way that our deceased family members or persons with whom we have shared strong bonds in life, continue to influence our adult lives as members of Christ’s body, as members of the mystical body of Christ. Since the liturgy of this memorial refers to the three traditional roles of the angels (to praise God, to be God’s messengers, and to offer protection), it seems a natural and a supernatural reality to consider our parents, our closest friends, and our own saintly patrons, who have all gone before us, to serve as our guides and intercessors before God.

St. Therese of Lisieux, who wrote passionately about her relationship with her Guardian Angel, and about the role of angels in the life of the faithful, also saw in her approaching death, the transition to an angelic life of service. It would be a heaven…spent on earth until the end of the world.

“I feel that I am about to enter into my rest. But I feel especially that my mission is about to begin, my mission of making God loved as I love Him, of giving my little way to souls. If God answers my desires, my heaven will be spent on earth until the end of the world. Yes, I want to spend my heaven in doing good on earth. This isn’t impossible, since from the bosom of the beatific vision the Angels watch over us.” (CJ 7/17/1897).

Today is a good day to thank God for the angels who have been a part of our lives, both when we were very young, and who have been added to our retinue of saints and angels since our maturity. May we always give thanks to God for our being able to be inspired, guided and prayed for by our angel-spirits who lead us to God and our heavenly rest.

Fr. Arthur Carrillo, C.P.  is the director of the Missions for Holy Cross Province.  He lives in Citrus Heights, California.