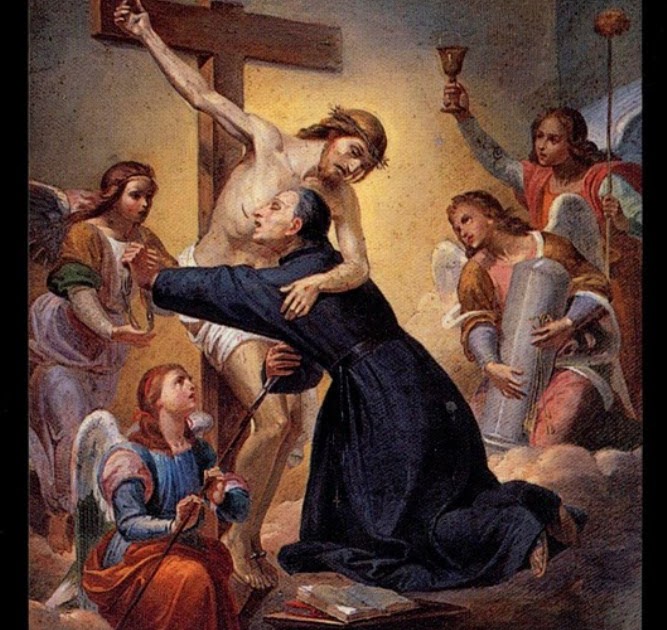 Feast of St. Paul of the Cross

Today is a very important day for all the Passionists throughout the world.  It’s the feast day of our Holy Founder, St. Paul of the Cross.  Perhaps you’ve wondered what inspires the various Passionist priests and brothers you have known?  What vision do they carry in their hearts that forms them into the people they become?  Jesus Crucified is, of course, the most important inspiration for all of us.  But a man of the 18th century, who allowed himself to be transformed by the love he saw in Jesus Crucified, is certainly a major inspiration as well.  So, I want to tell you a bit about St. Paul of the Cross because some people are just worth knowing.

Paul Daneo, St. Paul of the Cross, Founder of the Passionists, was born in 1694 in a small town called Ovada, in Northern Italy.  He was one of sixteen children, only five of whom survived infancy.  His father, Luke Daneo, owned a small clothing and tobacco shop that barely supported his large family.  His mother, Anna Maria, was a faith-filled woman, whose devotion to the Passion of Jesus was the source of her courage and strength as she endured the grief and loss of so many of her children.

From his earliest years Paul, by the example of his Mother, had a deep devotion to the Passion of Jesus and at the age of 19 had a vivid experience of the depth of God’s love.  As a result of this experience Paul became determined to give himself totally to God.  Due to family need, however, he stayed at home, helping to support the family by working in his father’s shop.  At 22 he joined the crusade against the Turks though it took only two months for him to realize that the army was not for him.  Returning home, he once again worked in the family business.

When he was 26, the circumstances of the family became a bit better and Paul finally felt free to pursue his own personal dreams. Bidding good-bye to his family, he went to Alessandria, where Bishop Gattinara, Paul’s spiritual director and confessor, clothed Paul in a black tunic on the day of his arrival and then sent him to the parish of St. Charles in Castellazzo for retreat.  In the small sacristy of the parish church Paul made a 40 day retreat.  It was during those 40 days that Paul had the most extraordinary experiences of union with God and wrote the Rule of Life for the congregation he hoped to found.

After his retreat Bishop Gattinara sent him back to his home town where Paul lived in various hermitages for several years.  In 1721 Paul made his way to Rome in hopes that he could get his Rule of Life approved by the Pope.  He was turned away by a Vatican guard so Paul returned home, discouraged but determined.  On his return, his brother, John Baptist, joined with him to try living according to Paul’s Rule of Life.  Paul and John Baptist became well-known catechists and Paul was even invited to give spiritual talks by various groups.

In 1725, the brothers returned to Rome and this time Paul was given verbal permission to gather companions to live according to his Rule of Life.  Cardinal Corrandini asked the brothers to work in a newly established hospital there in Rome.  The president of the hospital was so impressed by Paul and John Baptist that he arranged for them to be ordained to the priesthood.

As more men joined with Paul and John Baptist, they moved the whole community to Monte Argentario, a promontory about 150 kms northwest of Rome, where they established the first Passionist monastery in 1737.

During his lifetime Paul founded thirteen monasteries of Priests and Brothers throughout Italy as well as a monastery of Passionist Nuns.  Today the Passionists live and serve in 62 countries of the world and are enhanced by other religious and lay groups who find inspiration in the Charism of St. Paul of the Cross.

This bare outline of the life of Paul Daneo only describes some of the important moments of his life.  But it was his interior transformation brought about by his total openness to God’s love and his commitment to love God with his whole heart that made Paul into one of the most significant mystics and spiritual guides of the 18th century.  May his example lead you into a deep and passionate love for Christ who gave himself so generously for us all.

May the Passion of Jesus Christ be always in our hearts.