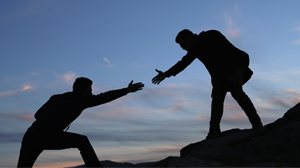 Surprise Our Neighbor as God Surprises Us

The God of Surprises meets us this Monday morning! There is the surprise of hospitality shown by a Samaritan who welcomes and unexpectedly cares for a wounded man. And as we advance through the post-exilic history of Israel we meet Jonah who tells a surprising tale that carries a surprising message for Israel.

Jonah bears the same name as a prophet who spoke words of hope alongside the Prophet Amos, a prophet of woe for Israel. Amos was correct. Shortly after these two prophets spoke the Assyrians destroyed the Kingdom of Israel. Our Jonah appears as one who speaks words of hope for the pagans, and the people of Jonah’s day would judge him as wrong as his namesake. He speaks what Israel is against.

When Israel returned from the exile in Babylon, there was a lot of work, opposition and time that passed before the people were reestablished. The Judaism that Jesus was born into has its foundation laid in these years. As a remnant struggling to survive Israel closed in upon itself, it became conservative, as for instance moving to prohibit inter-marriage to make itself a pure, strong people.

Jonah upholds the values of his people. He disdains Nineveh, the capital of the Assyrians, a place synonymous with brutality and oppression. He tries to escape God’s call which sends him to preach to the pagans. But God uses the story of his adventure as a challenge to Israel.

The people who heard the story of the Good Samaritan were humbled at that man’s goodness; a man against whom much prejudice was felt. From the book of Jonah’s perspective Israel is invited to be humbled because their representative, Jonah, is angry and unyielding, a man uncooperative with God’s good will. Jonah is acting just like Israel. Jonah needs a change of heart; Israel needs a change of heart.

It is not a surprise is that the Book of Jonah was not easily accepted into the canon of Scripture. A challenge to a change of heart touches us deep down where we find meaning and life. Can we today examine our hospitality? Jonah wanders through his adventures with great freedom and the wealth of the God of Israel to draw from. We possess that treasure too. Do we limit God’s freedom by holding back in sharing the wealth that comes from our experience of God’s generous love? We are surprised by God often. Sharing that surprise may translate into ways of being hospitable in the ordinary things of everyday life. Can we hear also in the calling to love our neighbor as our self, an invitation to a surprising hospitality that is reason to open our hearts without limit to all?