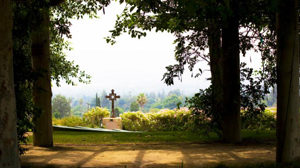 I recall once watching a short documentary on gender differences. A producer had spent hours and hours filming children playing and in the course of this he dutifully recorded a group of buys chasing a ball where one boy fell and hurt himself, but was left alone as all the others had raced on with eyes only for the ball. By contrast he had also recorded group of girls similarly chasing a hoop across the yard where one of the girls fell, but in this case all the girls stopped and went to the aid of the injured girl – the hoop forgotten for the moment.

I leave you to draw your own conclusions from the images. Perhaps they help us understand some basic orientations in men and woman, perhaps not. One would hope however that at least in the pursuit of the Kingdom a disciple – whether male or female – would be equally attentive to both the goal and to the care for each other in relationships, that is, to be attentive to both the task at hand and to those with whom one is journeying.

But at least today the text invites us to consider the discipleship of women. Of course there is only one discipleship although it has many dimensions and is depicted in numerous ways in the gospel – as listening and sitting at his feet, as accompanying him on his journey, as a staying in place and witnessing to those around us, as table companion and as one called to follow or as a preacher of the good news and promoter of the kingdom – to name a few of these dimensions.

What we might notice however in the naming of the many women in the text today is that they share freely in the ministry of Jesus and were a vital part of the whole mission. The ’naming’ of the women in a small way balances the ‘model’ of discipleship that we see far more often and with which we are most familiar – that of the group of men who followed Jesus.

Certainly the gospels reflect this image back to us far more often, and in this the gospel authors  mirror back to us the world of their times where custom, tradition and even law offered an image of society mostly reflected through the lens of men and their experience. But today we see too that he women’s role was vital to Jesus’ mission and that their closeness to him was real and valuable. The naming of the women also surfaces what is often a ‘hidden’ or even silent witness in the gospel stories – that from the beginning women were collaborating with Jesus and it reveals to us that Jesus mission was inclusive, open, equal and boundary breaking.

We must keep alive these aspects of mission today also.