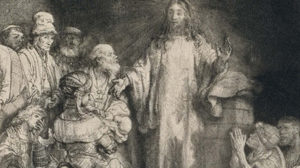 As I was reflecting on the gospel of today’s readings, I couldn’t help but notice how much Jesus responded within ordinary and daily situations to “…proclaim the good news of the Kingdom of God…” He had been preaching in the synagogue, but then leaves for the house of Simon’s mother-in-law. His presence signaled her healing, so much so that “She got up immediately….” At sunset, people were brought to him (they were brought to him, which suggests a dependency on some form of “care giver”), probably still around the house of Simon’s mother-in-law. The sick were healed of their illnesses, and those under the spell of evil, were freed from their demons. The next morning, Jesus seeks solitude, but the crowds, responding to his concern for them, come looking for Jesus, and try to keep him among them.

The response of Jesus is to affirm that his coming has been purposeful, it is to “proclaim the good news of the Kingdom of God” to other towns as well.

There is an attribute in the conduct of Jesus which clearly marks his ministry, it is a ministry of proclamation, and it is a ministry which responds to the suffering of ordinary people, the kind of people who might never have come to know of Jesus were it not for those who bring them to Jesus.

Our Holy Father, Pope Francis, reminded us of this missionary outreach in #15 of his Apostolic Exhortation, Evangelii Gaudium: the Latin American bishops stated that we “cannot passively and calmly wait in our church buildings”; we need to move “from a pastoral ministry of mere conservation to a decidedly missionary pastoral ministry”.

Jesus took the comings and goings of the people who lived in those villages around Galilee, and made them into opportunities to proclaim the Good News of Salvation and of the Kingdom of God. He especially made this proclamation to those who were suffering from the weariness of soul and body which we share in daily as we move about our city or town.

Let us try today to remember Jesus as the one who continually reminds us of the “Joy of the Gospel” (Evangelii Gaudium), and the place we are invited to take at the Table of the Lord.

Father Arthur Carrillo, C.P., is the director of the Missions for Holy Cross Province.  He lives in Chicago, Illinois.