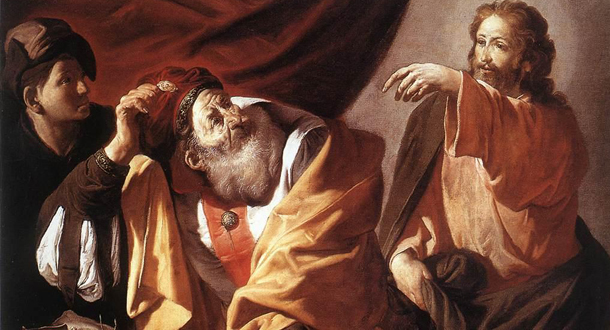 Today we recall the life and memory of the apostle, St. Matthew.  He comes down to us in history as one of the authors of our four gospels, and his gospel is usually placed at the front of the listing of these gospels in the bible.

He has the distinction of not only being called by the Lord to become His follower, but his calling was distinctive, along with that of Peter and Andrew, James and John, and Nathanael, because it enumerates him among those specifically named by Jesus, and provides some information about his background.  For Matthew was a tax collector, working for the government, and the government happened to be Roman controlled.  The Jews had no love for the Romans, their conquerors,  who, among other things, used Jewish wealth/assets for Roman projects, in which the Jews had no interest whatsoever.

At any rate, Jesus went out of His way to meet Matthew in his work setting, and He invited Matthew to become a follower of His.  Matthew jumped at the opportunity, for, Jew though he was, he was comparable to being a traitor to his Jewish background.  So he was not popular among his fellow Jews.  To have someone of the caliber of this remarkable young Jew named Jesus of Nazareth to invite him to join His specially chosen group of followers was a wonderful opportunity for Matthew to reconnect with his Jewish background again.  So he lost no time in inviting Jesus to his house and join him for a meal with many other tax collectors and “sinners”.

In view of this strained relationship, it is surprising (or maybe it’s not) that Matthew’s gospel has come down to us as an effort to present the life and death of Jesus as being in continuity with the religious convictions of the Jews, deeply rooted in the bible.  This became the conviction of Matthew in writing his gospel in which he depicts the way Jesus comported Himself in dealing with His Jewish compatriots.

And that’s why the words of St. Paul today are so appropriate in describing how Christians should live their lives, “striving to preserve the unity of the spirit through the bond of peace, one body and one  Spirit..one Lord, one faith,…one God and Father of all.”  And, again in St. Paul’s words, Paul writes the Christian community in Ephesus to anticipate attaining “to the unity of faith and knowledge of the Son of God…”

So St. Matthew hopes that his gospel will be instrumental in unifying Judaism and Christianity.  For he has undergone the pain of being ostracized from his native Judaism.  So Matthew can well be a bridge between the Judaism of our day, and our own Christian faith, even though the past century is replete with the horrors  of anti-judaism reaching its climax in the near annihilation of the Jewish race during Hitler’s time.  Judaism remains as the oldest religion on the face of the earth, with the possible exception of some far eastern religions like Hinduism and Confucianism.  Perhaps St. Matthew’s gospel can inspire us to see bonds of unity waiting to be tied between Christianity and Judaism.  May it serve to diminish anti-judaism from our society.