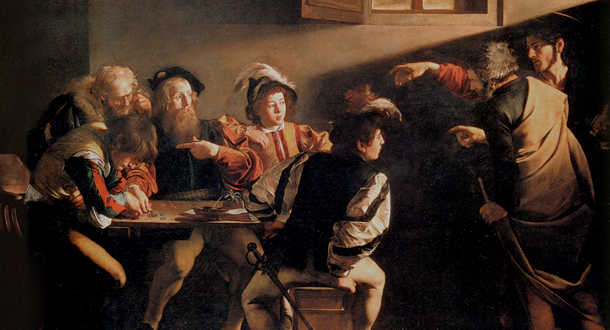 September 21 is the feast day of St. Matthew. Before he was called by Jesus to join his apostles, Matthew was a greedy and corrupt tax collector. In The Calling of St. Matthew, Caravaggio depicts the moment written about in the Gospel of Matthew, chapter 9, verse 9, which reads: “Jesus saw a man named Matthew at his seat in the customs house, and said to him, ‘Follow me,’ and Matthew rose and followed Him.”

The painting above is the Call of St. Matthew, by the 16th Century Italian painter, Michelangelo Merisi da Caravaggio, now recognized as one of history’s most influential artists.

“Jesus and Peter stand on the painting’s right, the former pointing toward Matthew. But which of the cluster of men on the left is this soon-to-be saint? Some scholars have suggested it’s the man hunched over coins, noting that the bearded fellow to his right appears to be pointing his way. However, the most popular interpretation is that this bearded pointer is Matthew, his finger pointed gently to his chest. This theory would explain why the radiant light shines down on his face to show he’s chosen by the light of the heavens. Still, other scholars believe Caravaggio was purposefully ambiguous about Matthew’s identity to suggest God could call upon any of them.” (From Wikipedia, Michelangelo Caravaggio)

Spend a few moments reflecting on the painting and Jesus’ call to Matthew.

Carl Middleton is a theologian/ethicist and a member of the Passionist Family.