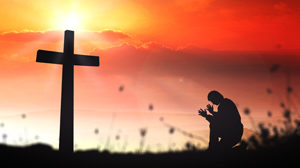 Fr. Phil Paxton, C.P., is on staff at St. Paul of the Cross Retreat and Conference Center, Detroit, Michigan.