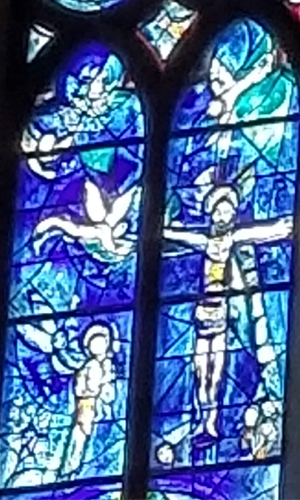 Thousands upon thousands were ministering to him, and myriads upon myriads attended him. ~Daniel 7:10

Depictions of angels can be found in most specialty shops, catalogs and art stores in the forms of small, medium and large statues, pictures, on prayer cards, garden art and numerous other objects. They can be found in stain glass windows and statuary of the great cathedrals of Europe and around the world. We grow up knowing the guardian angel prayer and hope we haven’t frightened ours off by the time we have “grown up”. In the Catholic faith there are the nine choir of angels beginning with the lowest to highest ranking; Angels, Archangels, Virtues, Powers, Principalities, Dominions, Thrones, Cherubim and Seraphim. In the Church we celebrate the archangels, Michael, Gabriel, and Raphael who are mentioned in both the Old and New Testaments. Michael’s name means, “Who is like God?” We have a prayer calling on St. Michael for protection. This archangel is best known for his battle with evil, as in the Book of Revelation. Gabriel is known as the messenger angel who announced to Mary that she was going to bear God’s Son. Gabriel’s name means, “God is My Strength” and is known as the Archangel of Wisdom, Revelation, Prophecy, and Visions. Raphael’s name means, “Healing Power of God”. We find this Archangel in the book of Tobit. He was sent in an answer to Tobit’s prayers and the prayers of his daughter. In this book of the Old Testament, Raphael is companion, guide, and heals Tobit of his blindness.

In today’s Gospel reading from John, Nathanael has come to see if what Philip said of Jesus is true. He discovers that Jesus knows exactly who he is and so he proclaims that Jesus is the “Son of God”. Jesus’ response is a reflection of Jacob’s ladder with, “you will see the heaven open and the angels of God ascending and descending on the Son of Man”. He also seems to be foretelling what will transpire at his Resurrection.

Angels are spiritual beings who assist God with those tasks on earth and in heaven. In the readings today we read that, “Thousands upon thousands were ministering to him, and myriads upon myriads attended him.”(Dn 7:9 – 10) What a sight that must be! All of those spiritual beings tending to God and doing what God commands. As I picture it in my mind’s eye it seems as if Heaven is a very busy place. During the Triduum I have pondered what the angels were doing as Christ went through his Passion, death and Resurrection. I can imagine Michael standing ready with an army of angels, waiting for God’s command. Gabriel watching with great sadness and Raphael wanting to heal broken hearts. And then great joy with Christ’s Resurrection and Ascension. And most likely they too understood the plan that God had in mind and tended to Christ on the day of Resurrection and the Ascension.

Today is a good day to reflect on these Archangels. Read and reflect on your favorite Archangel story and see where God leads you.