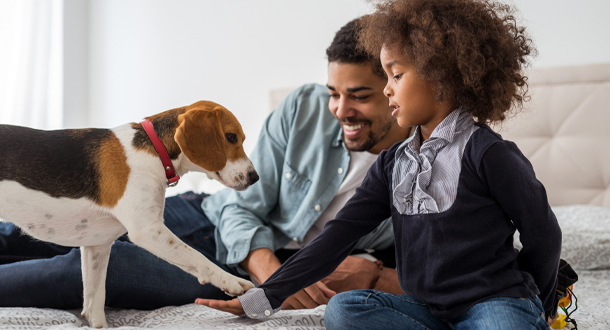 My father loved animals, especially, dogs. As a kid growing up, I remember that love leading to some tense moments in our household. Mom did not share that same level of love for animals. One evening dad brought home Rusty, a beautiful purebred boxer. He walked in the back door with Rusty who immediately took off running through the house with seven kids chasing after him—all wanting to play. (Shortly before that, we lost our pet cocker spaniel). While we kids were all happy to have another dog, I imagine my mother was hoping for a bit longer respite before the inevitable next pet joined the family. An argument ensued. Luckily for us kids, we got to keep Rusty.

Today it’s “in” to love animals. At one time, however, the Irish people were made fun of and demeaned for their love of animals.  According to Wikipedia, Gerald of Wales took a trip to Ireland in 1185, and he later wrote disparagingly of the Irish: “…They depend on animals for their livelihood and they live like animals.” While I believe many of us today would think those laudable traits, Gerald evidently, did not.

Clearly Jesus had to deal with this same kind of criticism as we read in today’s scripture selection:

“While Jesus was going through a field of grain on a sabbath,
his disciples were picking the heads of grain,
rubbing them in their hands, and eating them.
Some Pharisees said,
“Why are you doing what is unlawful on the sabbath?” (LK 6:1-2)

Many more such differences occur between Jesus’ time and my mom and dad’s opposing views—living together can be challenging after all. Before Jackie Robinson joined the Brooklyn Dodgers in 1947, African Americans ballplayers could only play in their own, Negro League. Native Americans were considered inferior because they didn’t live in houses or cities or practice religion or dress the way the European settlers did. The list goes on…

In today’s scripture selection, Jesus tells us what is important:

“Have you not read what David did
when he and those who were with him were hungry?
How he went into the house of God, took the bread of offering,
which only the priests could lawfully eat,
ate of it, and shared it with his companions?”
Then he said to them, “The Son of Man is lord of the sabbath.” (LK 6:3-5)

Help me today God to be less hasty to criticize people who see things or live differently than I do. Help me first to love them as you do and learn how to live with them in peace and harmony by changing me and not expecting them to change.