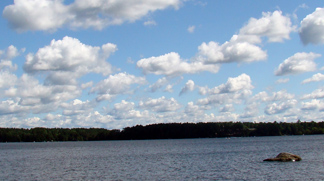 The title of my newsletter is “Think Life.”  It helps us to think of God.  I am reminded of the Providence of God.  In the Catechism of the Catholic Church we read: “Divine Providence is the disposition by which God guides his creation to perfection. By His Providence, God protects and governs all things which He has made, reaching mightily from one end of the earth to the other, and ordering all things well.”

I would not be here today, but for the Providence of God.  I grew up on a farm.  I had many close calls.  We all have our stories.  I will share my most recent story.

September 11, 2010, was a Saturday.  I was celebrant at the 11:30 Mass for the Centering Prayer Group, in the convent chapel of the Villa DeMatel in Houston. My homily was answering the question still on the minds of many, “Where was God that day?” So I said something like this: God was in an office on the 110th floor of the first tower struck by a plane.  Smoke was coming in under the door.  A husband was on the phone telling his wife that he would not be coming home in the afternoon.  His last words were, “I love you.”  God was with his wife in the family home.  She was holding their baby as she heard words which said she would be a widow and her son would be without his dad.   God was in the crowded stairwell at the 86th floor comforting people in need of hope.  God was in the airplane giving courage to several passengers trying to overpower two terrorists.

I concluded that neither you nor I were in the towers or on that plane that day on 9/11.  But for each of us there will be a   9/11 incident.  You will not be alone.  God will be there.

I continued with the Mass. Communion had been distributed.  I was seated at the celebrant’s chair.  It was time to recite the concluding prayer.  I could not move.  God was there. He deputized persons in the pews to be his angels.  Three samaritans – two Sisters and a lay man – came up from the pews to assist me.  An angel, a Sister nurse, half way down the middle aisle, diagnosed what was happening to me.  She pressed a button on a phone she was carrying with a direct connection to a doctor who specialized in stroke victims.  The doctor said, “I am coming.” Another angel found a wheelchair, and another dialed 911 and stationed herself at the entrance to the Convent Campus to direct emergency personnel.  Just as I was ready for the ambulance, the doctor came into the chapel.  He administered the shot for stroke victims.  Then he monitored my swift trip to the Medical Center.  As I was wheeled into the emergency room, the loud speaker alerted the staff, “Arriving 89 year old Caucasian Catholic priest, a stroke victim.” I was in the hospital four days.

Some will say that I was just lucky. That I was in the right place at the right time. Was it just a coincidence that I was in the chapel with support persons available that included a doctor with stroke victim medicine who attended me so quickly?  I say it was Divine Providence governing all things mightily.