St. Paul of the Cross, a preacher of the Passion for every age
Father Brian Traynor, CP 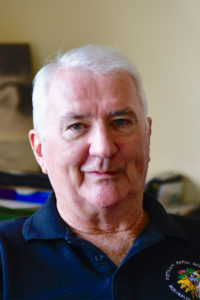 Paul was a man of his day and his spirituality was shaped significantly by his family experiences, the nature of social, political and church life in Italy during his lifetime as well as by the geography and landscape. He was drawn to work among the people who were deprived of spiritual care and who, because of the harsh conditions they experienced, imagined themselves deserted by God.

Paul’s persistence to form a band of men who could bring comfort and hope to such people, is nothing short of astonishing, given the many setbacks he experienced. He once wrote, “To finish off business in Rome, as is known, takes a thousand carats of patience, two hundred and eighty of prudence, and two thousand of painful waiting.”

He balanced his determination to achieve his dream, which he believed was God’s call, with a total abandonment to how and when this dream might happen. In 1736 he wrote to one of his spiritual directees, Agnes Grazi, “If God should inspire me to abandon this Retreat, how gladly I would – nobody knows.”

Paul’s commitment to the personal vow he made at age 26, was unwavering, and it was this attitude in Paul that inspired others to join him or to write to him for spiritual guidance.

Even the manner in which he made that vow displayed Paul’s character and faith. He had completed a 40-day retreat and set off from northern Italy in the belief that he could get Papal approval in Rome for the rule of life he had written during his retreat. He went to see the Pope without any appointment and was sent away by one of the guards. Disappointed and hungry, he found a quiet place by a nearby fountain and took out a piece of bread given to him at the hostel where he had stayed the night before. A nearby beggar asked him to share his bread.

He walked off and headed towards to the basilica of St Maria Maggiore, one of the four major basilicas in Rome. The Borghese chapel inside the basilica holds an icon titled ‘Salus Populi Romani.’ In present day, Pope Francis prays before this icon before he leaves or returns to Rome.

Paul knelt before the icon that day and came to interpret his rejection at the papal palace as a favourable cross, rather than as failure. He later said, “I was inspired to think that the time for approval of the Rule had not yet come.”

Kneeling before the icon of Mary with no apparent reason to hope his dream might come about, Paul vowed to found a Congregation that would promote in the hearts of people the living memory of the Passion and to gather companions to do the same.

We know that Paul wrote more than 10,000 letters. This was a major ministry for him. These letters indicate both his complete trust in God and his clear and practical spiritual advice.

He wanted people to understand how they could be close to God and be embraced by God’s mercy while engaged in their daily chores. In his letters he did not hide his own weaknesses. Many times, he described how he was worried or worn out by the countless difficulties that he faced. For those experiencing their own struggles, this was great comfort and it drew people to him.

Paul’s most devoted and faithful companion was his brother, John Baptist. They lived together for their entire lives and younger brother John Baptist was Paul’s spiritual director.

Throughout the early years when they went on missions together, John Baptist would conduct sessions for the clergy while Paul worked with the laity. Paul knew his brother’s strengths and they were an impressive team.

Paul learned the hard way how much he needed John Baptist after he struggled when travelling alone to Rome. His brother had warned Paul that they needed to travel together. From then on, they always worked together.

In 1745, Paul established a community in Toscanella. He left the practical arrangements with one of his trusted Passionist companions.

When Paul arrived for the official opening he was overcome with grief seeing the condition of the house donated to the Congregation. Their house had no roof or windows and the doors did not reach the bottom. Rats were entering the house. The men had no oil or blankets.

Paul was convinced his men should stay even though they had insufficient food to last more than two days. Despite protests from the leader of the community, Paul urged, “someone will come to take care of you.”

The following day Lucia (Lucy) Burlini came looking for Paul and was told he had gone. She had come 10 kilometres by donkey because she had heard he was there. She met Paul 12 years earlier when she was 24.

Being illiterate, Lucy needed to speak with Paul in person. When Lucy learned of needs of the community, she returned home and requested blankets, oil and food from her townspeople and returned with a fully laden mule.

Despite her own poverty, Lucy began to bake bread and to beg on behalf of the community. She made the long journey between Toscanella and home to deliver goods two or three times a week.

Lucy continued her charitable assistance for many years. After her death, Paul insisted Lucy’s relics be placed in the Passionist chapel. Lucy’s response to the Passionist community was born out of the spiritual assistance Paul had given her. Her profound gratitude to Paul literally saved those men’s lives.

Paul had many benefactor friends. Women and men were inspired by Paul and worked with him directly and indirectly. Many men joined Paul’s group and took up his way of life. Through his female followers Paul was able to establish a community of Passionist women. By the time he died he had established 12 communities.

Paul’s friendly and grateful nature inspired many people to contribute to his mission in practical ways. Each of his 12 retreats were donated.

One young man, Thomas Fossi, frequently donated oil and grain over many years and was so inspired by Paul that he wanted to become a Passionist. Paul reminded him that this was not possible because his primary responsibility was to look after his wife and children. When Thomas’ wife died, Paul accepted Thomas into the Congregation and he lived in the same community with Paul.

Paul was an inspiring man, and his numerous letters show determination to sustain relationships. He was robust, well organised and clear thinking. His communication was direct. He described himself as a Lombard (from Northern Italy) adding that Jesus had directed his disciples to say ‘yes’ if you mean ‘yes’ and ‘no’ if you mean ‘no.’ He added, “I say what is in my heart.”

Paul held a personal conviction of God’s love. He devoted his energies entirely to sharing that conviction and to guide his companions in leading contemplative lives while engaged in active mission. This, he knew, was the life Jesus created for his apostles. This mixture of reflection and activity was what drew men and women to work with Paul in ministry.

Perhaps the most unique aspect of Paul’s call to evangelize was urging his brothers “to exhaust every means possible” in bringing the message of God’s love to people.

Most founders identify a particular work for their Congregation. Instead of ‘works,’ Paul had a clear message that he wanted preached, and he urged this message should be shared wherever and however possible.

As far as we know, Paul is the only founder who wrote a rule of life before he had any companions to live that life! From the very beginning he was totally clear about what he wanted and terms such as ‘the Passion,’ solitude, mercy and companions were integral to how he evangelised.

In the opening chapter of his rule he devoted a section to the geographical location of the ‘retreats’ (retiro) where his religious would live. He did establish monasteries, but retreats – places to retire in order to pray and regain energy – were crucial to his vision.

His focus on retreats was in imitation of Jesus’ command to his disciples to ‘come away’ for a while after their arduous mission (Mark 6:31,32). Passionists were not to retire alone, but in solitude together.

Paul wrote in that same introduction to his Rule of Life, “The religious assigned to ministry after having worked for souls, can, in these houses of solitude regain that fervour which is sometimes diminished by works of charity.”

For Paul, there could be no evangelization without prayer and study. He praised his bother and co-founder, John Baptist, because “he never stopped studying.”

For Paul, prayer and study enabled a missioner to engage in solid preparation. Paul set out clearly that each religious’ simple room was to be a place of ‘imminent activity.’ Here a man would read, study and pray so that once he left the retreat his full energy was devoted to his mission.

Paul frequently claimed, “the Passion of Jesus is the greatest and most overwhelming work of God’s love.” He urged that missioners’ words should fall “like gentle rain on hardened hearts.” The message was simple, “Here learn the science of the saints; all is to be found in the Passion of Jesus.”

Encouraging people to experience and trust in God’s love as Jesus did most profoundly in his Passion and cross, Paul urged, “Abandon yourself into the hands of God, like a ship with neither oars nor sails, letting go of yourself totally.”

What was Paul’s call? Late in life he declared, “If I could have my life over, and preach just one sermon, I would speak about the total mercy of God.”

Paul was driven by a desire for people to know and experience God’s love as he had come to know it. He believed the best way to experience this love was to encounter in prayer the total self-giving of Jesus in his Passion and death.

Because he held this conviction, Paul was able to write, “If God should send a plague, I would willingly be the first to leave my solitude and go to the assistance of the plague-stricken. I would willingly remain at their sides until their last breath, even though it meant the sacrifice of my own life.”

Jesus began ministry as a disciple of John the Baptist. After John was arrested and killed, Jesus took up John’s movement. Jesus set aside John’s demanding call to repentance and put his primary emphasis on inviting people to “Come follow me.” His promise to people was to experience God’s profound friendship and the truth that all people are sisters and brothers bound together by God’s overwhelming love.

Jesus’ encounters with everyday people opened his mind and heart to the call God had for him. In the same way, Paul of the Cross became increasingly convinced that God’s mercy was lavishly offered to the poor and to sinners. He directed his followers to work in the regions where others would not go for fear of contracting malaria.

Paul’s call was to preach this message of God’s mercy, and while he saw parish missions as an obvious opportunity to share this “Good News,” his spiritual guidance shared in thousands of letters, was an evangelizing opportunity to which he was equally devoted.

While Paul hoped for a community of preachers, he recognized not all his men had the gift to preach. He encouraged them not to focus on what they did, but what they must proclaim. If they could experience in their own hearts, the total self-giving of Jesus, then they could in a myriad of way proclaim to others as he did “that the Passion of Jesus is the greatest and most overwhelming work of God’s love.”