Following are answers to questions we have received to date. We welcome additional questions, so please email them to [email protected].

Scroll through the FAQ or use the links below to go directly to the questions that interest you.

What are you planning to do, and why?

Mater Dolorosa is owned by the Passionists of Holy Cross Province, headquartered in Park Ridge, Illinois, which purchased the 88-acre site in 1924. We have been holding religious retreats here since 1925, and intend to keep doing so for many decades to come, just as we will continue to provide a meeting location for various ecumenical groups and recovery programs.  The southern part of our property has always been vacant and has previously been recognized by the City as being zoned for, or eligible for, residential development.  In 2007, the Province tasked our Board of Directors with evaluating selling this vacant property in order to raise funds without impacting our retreats. Funds are needed to support our ministries across America and care for our priests and brothers, who now have a median age of 72. There are currently 58 vowed Passionists at Holy Cross Provincem of which two-thirds are 70 or older.

After considering multiple alternatives, we reached a decision that a neighborhood of new homes was the alternative most likely to meet the Province’s needs, protect the retreat experience and have the least impact on our neighbors. The Province plans to sell this southern parcel to a homebuilder, and our local Board of Directors will work with the homebuilder and residents throughout the process to ensure the resulting neighborhood:

Do you have a site plan that shows how the property will be developed?

No, it’s much too early in the process for that. We are now talking to neighbors, other interested parties, the city and homebuilders to obtain a greater understanding of what a good plan for the property should include and avoid. The conceptual site plan shown in the “Residential Neighborhood Plans” section of this FAQ captures for discussion purposes what we’ve learned so far. The selected homebuilder will prepare a project description and site plan after conducting their own community outreach and undertaking more extensive studies.

Explain the approval process and the opportunities the public will have to be involved.

The official process starts when the developer files an application with the City describing the plan for the community; this will be a public document available for review. The City will then select an environmental consultant. A public meeting will be held so all interested parties can suggest what the project’s Environmental Impact Report (EIR) should study. The draft EIR will be circulated for review by the public and other interested parties, and all comments received must be addressed in the final EIR. The final EIR will detail all the environmental impacts deemed significant and recommend mitigations designed to reduce those impacts. The City Planning Commission and City Council will hold public hearings on the project before voting on it.

What assurance is there that the homebuilder will build the project as it was proposed?

How can we be assured that the Retreat Center or the hillside parcel won’t be developed?

Our efforts are focused on a positive residential plan for our vacant southern acreage. Upon City approval of building permits for the southern parcel, we are prepared to preserve a hillside parcel of up to 45 acres. As for the Retreat Center parcel, holding religious retreats is a core mission of the Passionists. Retreats have been held here for more than 90 years, and we look forward to holding them here for decades more. We continue to make investments in the Retreat Center’s facilities, but the Province currently has no plans to add any buildings.

How will your plan be different from One Carter?

The original developer of One Carter wanted to subdivide its hillside property into lots, sell them piece by piece, and be done with Sierra Madre. In contrast, we intend to be here for decades to come and will be the closest neighbor to what’s built on our property. We are going to select a homebuilder who is sensitive to the unique character of Sierra Madre.  Moreover, we will be consulted in the layout of the site and the design of the homes to meet the commitments stated in our answer to the first question above. Physically, our property is unlike the One Carter property: It is relatively flat and not in the hillsides, so our building pads can be sized similarly to those surrounding us. One Carter is in the hillsides, and while the lots are large, the building pads are small and don’t conform with Sierra Madre’s village character.

Will the project strain Sierra Madre’s infrastructure and city services?

Because the new homes would represent just one percent of the current number of homes in Sierra Madre, the new neighborhood will have little discernable impact on infrastructure or services. The scope of any such impact, balanced against the benefits the project will bring to the community, will be addressed in the future Environmental Impact Report. The City will analyze revenues generated by the new homes and the City’s costs in serving them. The requirement to reduce environmental impacts can actually have a positive effect on the City’s finances. For example, in some jurisdictions homebuilders are required to make ongoing street maintenance in the neighborhood the responsibility of a Homeowners Association, so the City doesn’t have to pay for it.

What fiscal benefits will the project bring and how did you compute them?

The project will result in one-time development fees, new property tax and utility tax revenues, and new sales for City businesses. The actual contributions will be presented in the fiscal impact analysis of the EIR, but we prepared estimates as follows:

What about the new water demand created by the new homes?

New homes will be required to comply with new statewide water efficiency rules and therefore will use about half the water homes built before 1990 use. The homes built at Mater Dolorosa will be even more efficient because new regulations going into effect in 2016 require even more water-efficient fixtures and more drought-tolerant landscaping.

But it’s true – even with these savings, a new home creates new demand. The selected homebuilder will work with the City to maximize water efficiency throughout the development to protect Sierra Madre’s water supply reliability, and recognize that the City could use our development impact fees to fund water conservation and/or water supply efforts elsewhere in the city that could fully offset any remaining new demand.

Here are some things to expect in new homes based on building codes, drought and environmental regulations and efforts by homebuilders to meet consumer demand for greater water efficiency:

Answers to these questions must await a specific project application and EIR. Construction impacts are required to be considered in EIRs, and a number of mitigations are typically required to reduce impacts. These could include restrictions on the hours of operation, defined routes for construction traffic, prohibitions of off-site parking of construction vehicles, limitations on truck idling, and dust control measures. We have been told by developers that the relatively flat nature of the site makes it possible to grade the site without having to import or export soil, so it appears that dirt-hauling trucks won’t be needed. 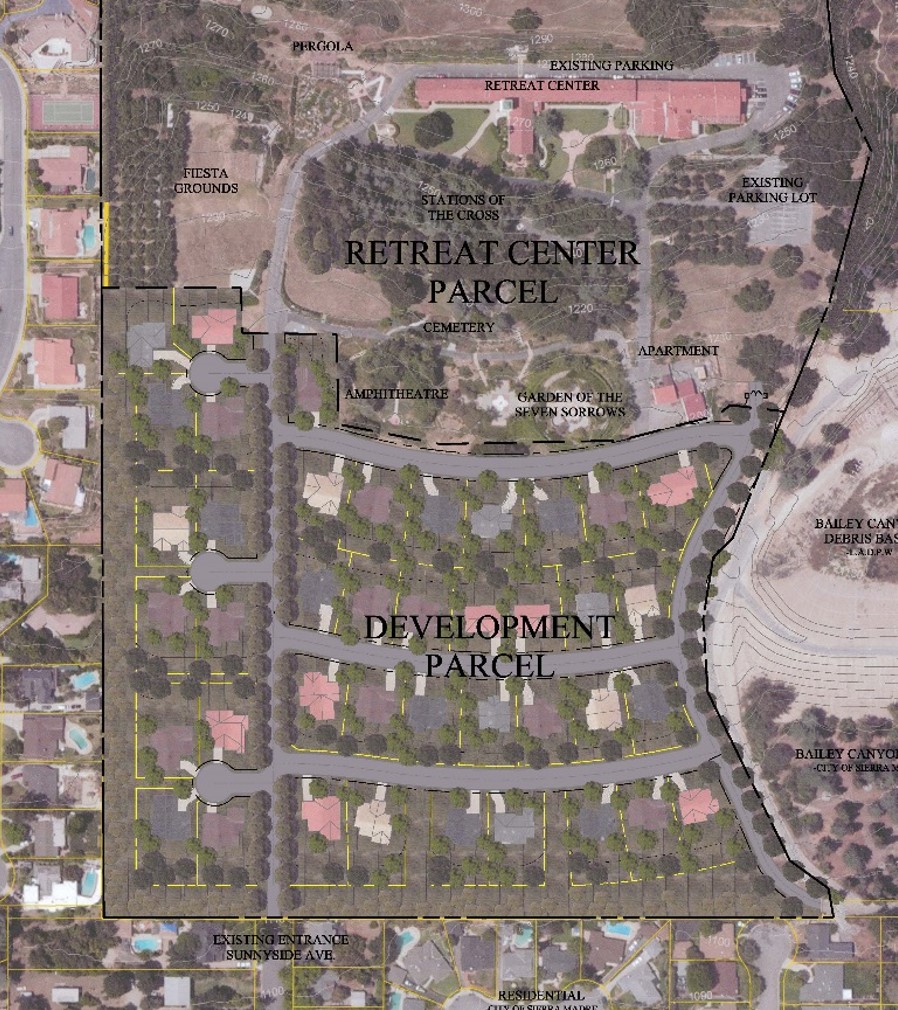 How will the design of the neighborhood protect neighbors?

We will work with the selected homebuilder to see that lots will be similarly sized to those adjacent to our property, and will be consistent with the City’s low density zoning rules. New homes abutting existing homes along the southern and western edge of the site will very likely be single-story to be sensitive to our immediate neighbors. Storm water regulations require that runoff be captured and held so it can seep into the ground; this is normally done in natural open space buffers that will also serve to separate the new homes from neighboring homes.

Are you building McMansions?

No. We have pledged that the selected homebuilder will build homes that protect the village character of Sierra Madre – similar architectural styles and homes that don’t crowd the lot they’re built on. Under the City’s zoning and building codes, we expect the lots and building pads to be similar in size to those around the site, and the lot coverage ratios to be similar to those of established Sierra Madre neighborhoods. Because of our commitments to our neighbors and the need to protect the Mater Dolorosa retreat experience, we will be consulting in the design of the site plan and home designs.

What do you mean by “protecting the village character and look and feel of Sierra Madre?”

Are there other options besides homes?

Any option must protect the Mater Dolorosa retreat experience, be a good neighbor to those living near us, and provide benefits to the City. It must also generate the funds required by Holy Cross Province to care for our senior priests and brothers and support our ministry work. Options that could meet these criteria include:

Have you selected a homebuilder?

When the City passed a number of moratoria affecting the permitting of new homes, the homebuilder we were in discussions with turned their focus to other projects. We intend to request new development proposals from homebuilders in the near future.

How much traffic will the project generate?

This question can’t be answered until a project is designed and a traffic study is completed as part of the Environmental Impact Report. To get an idea of how much traffic a project like the one we’re considering would generate, stand on Fairview Avenue between Sierra Keys Drive and Crestvale Drive and count the cars driving in and out of those streets. There are 47 homes along those two streets, so what you see should be comparable to future traffic from the new neighborhood we are proposing.

Will Carter Avenue be used as a project entry?
The primary entry will be on Sunnyside Avenue, but a Carter Avenue entry will likely be considered by the City in the EIR because it could better balance ingress and egress from our property, which is why a Carter Avenue entry currently exists on site. Whether the new residential neighborhood would require an entry from Carter either full-time or for emergency use only will be determined by the number of homes built, the amount of traffic generated, the nature of the traffic and the input of local fire and police officials–which will be known when a project is proposed and an EIR is completed.

Where will Good Friday visitors park?

There still will be significant on-site parking, and we will work with local schools and churches to provide additional off-site parking and shuttles, as needed. We will work with our neighbors and the City to find ways to prevent parking on Sunnyside and other nearby streets during this popular event.

What will be done to protect wildlife the new homes will displace?
Even after development on the 20-acre Development Parcel, there will be a great deal of natural open space at Mater Dolorosa – the 45-acre Hillside Parcel, the significant open space within the 23-acre Retreat Center Parcel, and approximately three acres of natural open space that would be part of the Development Parcel. More detailed biological study will accompany the Environmental Impact Report, and the biological mitigations that come from that study will guide us, the City and the selected homebuilder in designing the project appropriately.

How much would it take for the City to purchase the land and set it aside as a park?

Highly buildable land like this in a very desirable area of Los Angeles is valued at $1 million to $2 million an acre, or $20 to $40 million for this 20-acre parcel. Additional revenue would be needed for park improvements and ongoing maintenance.