When a foundation in a country is established, it is called a Mission. As the Passionists develop in that area of the world and are able to have their own leadership, it becomes a Vicariate. When it becomes almost self-sufficient, it becomes a Vice-Province and finally when it is self sufficient, it becomes a Province. For better solidarity among Passionists, regarding personnel, education and finances, our Congregation is divided into five configurations. In the United States, there are two Provinces: Holy Cross Province (us) from the Ohio River west to the Pacific and St Paul of the Cross Province, east of the Ohio River. Our Configuration is called Christ Crucified as is composed of the following countries: Canada, USA, Mexico, Jamaica, Haiti, Brazil, Argentina, Paraguay, Uruguay and Mozambique (a mission of the Calvary Province of Brazil). 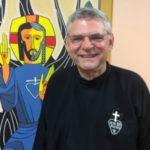