A spiritual daughter of St. Paul of the Cross, Gemma Galgani’s life carries a great message for all Passionists. To be called to be a Passionist is a calling “to suffer many things,” like Jesus himself who came not to be served but to serve and to offer his life for his brothers and sisters.

Gemma (meaning “gem”) was the first, girl child born to the traditional, Catholic Galgani family on March 12, 1878, near Lucca. Inspired by her mother’s teachings, Gemma developed a love for Jesus and a strong devotion to prayer at a very young age. Little Gemma lost her mother when she was only eight years old. It was after this tragic event that Gemma’s father sent her to a Catholic boarding school run by the Sisters of St. Zita, which she described as “paradise.” 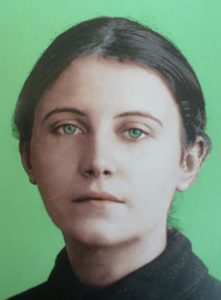 The next major event in Gemma’s life happened when she was only 19 years old with the passing of her father. Gemma was left orphaned and without any means of support. Soon after this event, Gemma experienced a long and serious illness. As her conditioned worsened, she developed spinal curvature and even paralysis. It was believed that no medical remedy could cure her. With hopes of a miracle, one of the sisters gave Gemma a novena card along with the story of the life of the young Passionist, Gabriel Possenti. On her deathbed, Gemma fervently prayed to him. During the prayers of the Novena, Gabriel appeared to Gemma. In promising her that she would wear the same habit he did, Gabriel told her that she would be blessed with a cure and that a special grace was being prepared for her.

The miracle of a cure came on March 2, 1899. Then, on the evening of June 8, 1899, while she prayed with Jesus in his sufferings, the Blessed Mother appeared to Gemma and spoke of the grace she was to receive. She described what took place in her own words:

“At that moment Jesus appeared with all his wounds open, but from these wounds there no longer came forth blood, but flames of fire. In an instant these flames came to touch my hands, my feet and my heart. I felt as if I were dying, and should have fallen to the ground had not my mother held me up, while all the time I remained beneath her mantle. I had to remain several hours in that position. Finally she kissed my forehead, all vanished, and I found myself kneeling. But I still felt great pain in my hands, feet and heart. I rose to go to bed, and became aware that blood was flowing from those parts where I felt pain. I covered them as well as I could, and then helped by my Angel, I was able to go to bed … .”

During the remainder of Gemma’s life, many witnessed this recurring miracle of the holy stigmata.

Soon after this extraordinary blessing, Gemma made the Holy Year mission at the Cathedral of St. Martin where she first met the Passionist missionary, Father Cajetan. He listened to her miraculous story and allowed her to take private vows.

Through Father Cajetan she was introduced to Father Germano Ruoppolo. At the time, Father Germano was the postulator general working on the cause for the beatification of St. Gabriel. An eminent theologian and well acquainted with mystical prayer, Father Germano recognized Gemma’s profound, prayerful life. In their prayerful conversations, Gabriel continued to promise Gemma that she would become a Passionist Nun. It is believed that due to health problems, Gemma would, in fact, remain a layperson and was never to become a nun. For this sacrifice, the Lord told Gemma that a convent would come to Lucca through the work of her spiritual father, Father Germano.

Our Lord called Gemma home on Holy Saturday, April 11, 1903. One of the sisters present clothed Gemma’s body in the habit of the Passionists, the order to which she had aspired. On October 3, 1905, Father Germano obtained a letter of authorization from Pope Pius X for the foundation of the convent in Lucca. In 1906 Euphemia Gianini entered, taking the name Gemma Magdalena. How proud Gemma would have been! The convent grew and flourished. Pope Pius XII canonized Gemma Galgani in 1940. Her body is buried in the chapel of the new convent at Lucca.

Although Gemma Galgani was not a Passionist in the canonical sense, God raised her up as a true paradigm for those with a desire to follow St. Paul. Such a commitment demands an inner conformity to the Passion. Marked with the physical wounds of Jesus, Gemma reminds Passionists how they are called to keep the memory of the Passion alive not only in word but in actions. Through example and suffering, the Passionists must live a loving commitment to follow Jesus crucified, in a generous resolve to proclaim his passion and death with faith and love. For as the original rule states, Passionists are called “to suffer many things,” not only for the glory of God and for their own personal salvation, but also “for the salvation of others.”