Blessed Inocencio of Mary Immaculate (Emanuele Canoura Arnau) was born on March 10, 1887, in Santa Lucia del Valle de Oro, Spain. Professed a Passionist on July 27, 1905 and ordained a priest on September 20, 1913. He was most zealous in exercising this ministry in various communities of his religious province (Precious Blood). During the so- 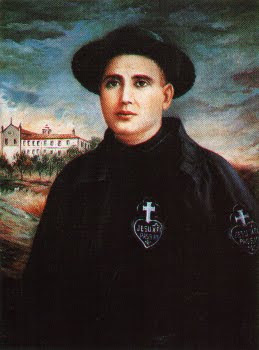 called “Revolution of Asturias of 1934”, while he was celebrating mass in the Institute of the Brothers of the Christian Schools in Turón, he, together with eight LaSalle Brothers, was taken prisoner by those who were filled with hatred for religion. All were executed on October 9, 1934. Inocencio, together with those martyred with him, was canonized by Pope John Paul II.

Printed by Passionist Generalate, Rome 1992 with update of Canonization.