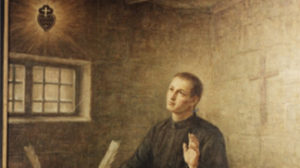 Paul Daneo was born on January 3, 1694, in Ovada, Italy. Even as a young person, Paul felt strongly connected to God and moved by the passion of Christ.  At the age of 19, Paul’s father wanted him to become a merchant like himself. Marriage was a possibility looming in the future. At times Paul dreamed of becoming a soldier, and even enlisted in the Venetian army when volunteers were requested by the Pope.

But he soon realized that neither the adventure of a military career, the financial promise of the business world, nor the joys and sorrows of marriage were to be his life’s journey. He heard the voice of God calling him to a life of the spirit and a path of spiritual rigor.

Father Paul Francis Daneo, St. Paul of the Cross, as he is known today, was a unique chaplain in the armed services in that he served both sides.  He started a great and honorable tradition for his followers.  Since his time, Passionists have served as military chaplains and ministered in the camps and on the battlefields of the world’s never-ending wars.

While times have changed and wars have grown increasingly brutal, the work of the armed services chaplain has remained basically the same. Men and women removed from civilian life, away from their families, fighting and hoping to make it another day are especially in need of spiritual nourishment.  It is the chaplain’s duty to counsel and give encouragement to the soldiers; to preach the Word of God, administer the Sacraments and celebrate the Eucharist.