Born in 1745 in Civitavecchia, the port city of Rome, Italy, Vincent Strambi was an only child who lived a devout life as a youth thanks to the example of the Franciscans.  His religious fervor led to his entering the seminary at age 15.  The Dominicans shared in his seminary formation, helping foster his interest in preaching and spirituality.  He met the great preacher, St. Paul of the Cross, and after Vincent’s priestly ordination, he felt God’s call to join the Passionists, who were known for their preaching and contemplative spirit. 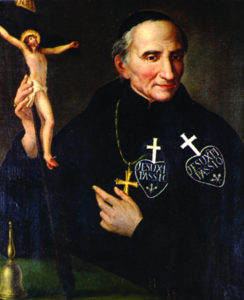 Vincent Mary blossomed in his Passionist life and became a great preacher and a promoter of community life as both a local and provincial Superior and as a seminary formation director.  He was an outstanding spiritual director for both laity and religious, and wrote many devotional books including a noted biography of St. Paul of the Cross, Founder of the Passionists.

His many gifts were recognized by the Church, and Vincent Mary was appointed bishop of Macerata and Tolentino.  He was a true shepherd of the Church, helping reform the clergy of his day and advocating for the Church against the political upheavals of the day.  As bishop, he brought the spirituality of his Passionist vocation to his ministry, especially the spirit of prayer and pastoral dedication.

Vincent Strambi died on January 1, 1824, leaving a legacy of tireless love of God and the Church, in and through the Passion of Jesus.  His preaching, his writings and his zeal for souls speak to us today as we respond to the needs of God’s people who are searching for meaning and direction in life – especially those marginalized by poverty and suffering.  His life speaks today to both vowed and lay Passionists:  to those who preach missions and retreats, to those involved in seminary formation, to those seeking growth in spiritual direction, those called to leadership positions in the Passionist Congregation and the Church and to all of us as we seek to grow in God’s love in the Passion of Jesus.

We thank God for the life of St. Vincent Mary Strambi, CP, and pray that God will graciously send other men and women to proclaim the Good News of Jesus Crucified today.

A Spirit of Holiness 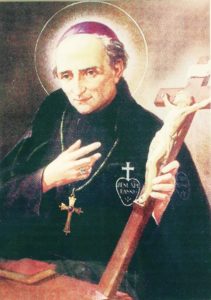 In 1773 Father Paul put the former seminary prefect and rector in charge of the training of the young students for future missionary preaching at the newly acquired monastery of Sts. John and Paul in Rome. Eventually Father Vincent would write a manual on Sacred Eloquence.

In this way Father Vincent was able to be with St. Paul during the final years of his life. Paul saw in this young man the apostolic spirit of holiness he was bequeathing to his congregation. We are told that as he was dying St. Paul one day turned to Father Vincent Mary and told him he was entrusting the congregation to his care.

Vincent, like the others, missed the founder very much as he continued to prepare young Passionists for the missionary apostolate. He also went forth to preach missions as often as possible.

In 1780 he became rector of the Community of Sts. John and Paul. In 1781 he was elected provincial. He also served as provincial and general consultor. During this time that he published a biography of the founder. Father Vincent used the testimonies of eye-witnesses as given in the canonization processes. It is said that he wrote the life of St. Paul on his knees, out of reverence for the founder. His "Life" of Father Paul became a classic and was greeted with enthusiasm by many.

As the Vatican Council has reminded us, God calls Christians from both the lay and clerical states to the religious life. Father Vincent Strambi came to the Passionists as a priest who had been formed and educated in a small Tridentine seminary of that period, but who had also experienced university life in Rome and Viterbo. But even more he had shown the talent for teaching and training other young men for the priesthood. These talents and experiences he brought to the congregation at the critical period following the death of the founder and throughout the Napoleonic revolutionary suppressions and during the restoration.

Eventually appointed to bishop, Strambi was loyal to the pope and Holy See. He was a true pastor of souls, and not involved in political matters unless forced by circumstances of the times. He brought to the episcopacy a spirituality of prayer, prudence, and pastoral dedication.