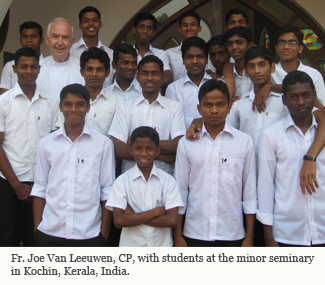 We Are Not Asking for Ourselves
Fr. Joe Van Leeuwen, CP, Missionary in India

Fr. Joseph Van Leeuwen, CP, was born in rural Kansas in 1936 and was ordained a Passionist priest in 1964.  Long associated with our Passionist parish ministries, in 1991 he offered to be one of the Passionists on a 6-month visa in the recently formed Passionist Mission in southern India.  In 1996, Fr. Joe was asked to return to India for about five years. Fifteen years later, Fr. Joe is still in India, serving at the Passionist minor seminary in Kerala, India. He is interviewed below by Fr. Arthur Carrillo, CP.

“Missionary.” What does it mean to you, in your life?

First, it means helping to establish the Passionist Congregation and Mission in India.  In this regard, I am working in the minor seminary, helping in the formation of high school age seminarian students.  I want them to know what we call the Passionist charism, the spirit of our Congregation.  Secondly, I see myself as a missionary to the people of India.  South India has a greater percentage of Christians than the north. I work in parishes, especially for the English-speaking people. I give retreats; I also teach in one of the international schools, and offer counseling.  As a missionary, I make myself available to the people.  For example, in the confessional, walking down the street, riding on the bus, wherever I meet people.

It sounds as if you like people; are you a gregarious person?

I love meeting people, the young, the old, the people on the street.  In Kerala, we have a wonderful opportunity to meet Christians, Muslims and Hindus.  People have a lot of questions for a Christian and a priest.  It’s a great opportunity to be among the various religions.

What parts of the Passionist charism resonate with the Indian culture?

Preaching does. Let me tell you a story: on Good Friday I preach the Passion sermon in the basilica. I use a poem, “Man on the Cross.” Months later I was at a wedding reception and a young man came up to me and said, “I can tell you what you preached about last Easter.”  He said, “You preached about the man on the cross. I will remember that for the rest of my life.”

Secondly, working among the poor. When we went to (the state of) Tamil Nadu, we had asked the bishop to assign us to one of his poorest parishes. He did. In Randham, we provide for the education of the people who live there, not just the Catholics. Without an education, the children will have no future. We also organize programs to better the economic condition of the poor. Our other parish, in Kerala, is a poor fishing village. 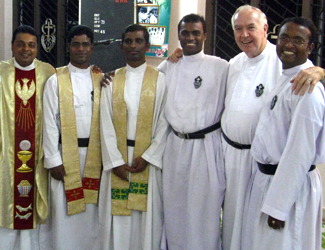 You work with seminarians.  With what aspects of Passionist life do the students identify?

A few have come for the preaching aspect of our vocation. Another value is the community aspect of our life. Many of them have come from strongly-knitted families.  A more reflective answer would be to say that the students identify with three aspects of Passionist Spirituality: a) our service to the poor; b) the hospitality and community spirit they see in our home life; c) the role and practice of prayer in the community.

How do you see the Passionists in India developing over the next ten years?

We are working to change our status as a mission vicariate to become a more mature vice-Province  in 2013.  In the next two years, we will ordain 11 priests, giving us 50 Indian priests and one brother.  Our missionary cooperation among other Passionist Missions is also developing; we have three men in Australia, one in Africa, one in Vietnam, and one here in the USA.

If you could say something to the people to whom we preach mission appeals, what would you say?

I would say what Mother Teresa said to a man in India who did not like her.  She asked him for help for the poor. He looked hatefully at her and spat on her.  She said, “Thank you. That was for me. Now what do you have for my poor people?”  We are not asking for ourselves.  We are asking for the poor people of India, which, in spite of its economic progress, is still a country with many poor people who depend on the help that missionaries can give them.