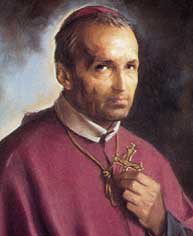 Memorial of Saint Alphonsus Ligouri, Bishop and Doctor of the Church

Today is the feast of Saint Alphonsus Liguori, the 18th century Founder of the Redemptorists and a great moral theologian.  He is honored as a “doctor” of the church, a title given to the most influential theologians in the church’s history.

The readings today are not selected specifically for this feast but are part of the sequence of readings we happen to encounter in the midst of this summer.  The first readings for many days now have been from the prophets: Amos, Isaiah, Micah, and now Jeremiah; the gospel readings are taken in sequence from the Gospel of Matthew.   Although the convergence is not by design, in fact, both these selections point to a very persistent and challenging motif of the Scriptures—the dangerous role of genuine prophets.

In the reading from Jeremiah, we learn in his own words that people want to kill him for speaking the truth to powerful leaders of Israel: “This man deserves death; he has prophesied against this city, as you have heard with your own ears.”  The threat does not silence Jeremiah.  He is fortified by the realization that what he says to his people is a message from God, even if the cost of delivering it is the loss of his own life.

Jeremiah is spared this time but not so John the Baptist, who also has the role of prophet many centuries later.  John spoke out against the excesses of Herod Antipas’ court, particularly his incestuous marriage with Herodias. In one of the most vivid stories in the gospels, Herod, a corrupt ruler, is infatuated by the dance of Salome, the daughter of Herodias.  The sotted king, overly lavish and vain in his promise to give her whatever she desires, falls into the malicious trap of Herodias who prompts her daughter to ask for the head of John the Baptist on a platter. And thus, the great desert prophet who announced the appearance of Jesus himself gives his life for telling the truth.

In Matthew’s Gospel, the fate of John anticipates the fate of Jesus himself.  Jesus, too, will lose his life for declaring the truth.  Powerful ruling elites and the Roman procurator will conspire to take the life of the Son of God.

We live in a time when telling the truth seems to be under assault in so many corners of our society.  Speaking the truth, especially “speaking truth to power,” as the saying goes, can be dangerous now as it was then.  Most of us will not have a dramatic, public role as a prophet, such as Jeremiah, John the Baptist, and Jesus himself.  But there are times when we, too, must risk speaking the truth—and living the truth—when it may be costly.  Sometimes we must exercise “tough love” when someone we care for is making a serious mistake in their lives.  Sometimes we have to speak up when innocent people are being maligned.  Sometimes we have to shut down, rather than pass on, false and hurtful gossip.  These, too, are prophetic moments that require the courage and integrity of a prophet.