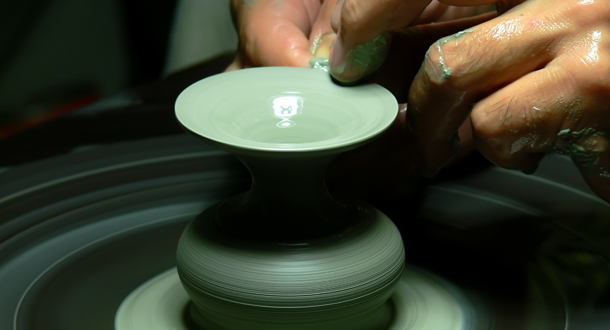 The figure of the potter in today’s first reading really makes one pause and savor all of the images that flow from this “earthy” example of God’s desire to provide for the chosen people.

This is an image that has inspired sacred songs, sacred art and more than a little personal introspection. Although in the context of the prophet, God’s message is a warning of the consequences to the people’s infidelity to the covenant, it has become the very rich basis for trusting in God’s provident care for the people who recognize their dependence on such a loving “creator.”

The potter is, first of all, someone who massages life into the sterile clay slab that sits on his wheel. In the book of Genesis, Chapter 2, we read that the “earth” (adama) became a human being (adam) in the garden under the careful sculpting of God followed by God’s breathing life into the clay out of his own respiration.

Once placed onto the potter’s wheel, the careful massaging of the clay in motion can create new and harmonious shapes, over and over again. The shaping tools are the palms and fingers of the potter. This is a challenging image because it means that when we feel that the “pressures” of life are forcing us into awkward or useless shapes, we might remember that the potter is never finished until he is finished.

Fr. Arthur Carrillo, C.P.  is the director of the Missions for Holy Cross Province.  He lives in Citrus Heights, California.